There is a big difference between the behavior of Google Drive and OneDrive.
This article explains the main issue when migrating from Google Drive to OneDrive and provides Cloudiway’s solution.

This article can be downloaded as a pdf (link at the end of the article).

Let’s build an example and see how it gets migrated.
We have 2 users, user root and user Emmanuel.

View of the Google Drive of root

View of the Google Drive of user Emmanuel

The collaborative folder appears in the SharedWithMe View of Emmanuel.
Emmanuel Drags and drops the folder in his Google drive 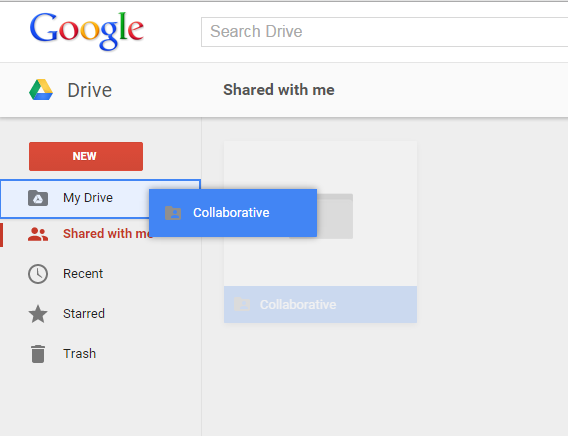 After working on it and reorganizing it, the Google drive of Emmanuel looks like this.

Explanation:
Emmanuel has a folder at the root of his Drive named projects. It contains several subfolders corresponding to the different projects Emmanuel is working on.
Collaborative (the shared folder owned by root) is moved to the projects folder.
Several people are now contributing to the collaborative folder.
It now contains 3 objects:

Here is how this folder structure looks like in the Google Drive of Root.

OneDrive doesn’t have the functionality to drag and drop folders from the Sharedwithme view to the personal OneDrive.
Consequence, after the migration, the drag & drop folders and documents are missing from the OneDrives of the users. There are still accessible to the users (because permissions are migrated) but they are visible only through the SharedWithMeView.

Now, the real and biggest issue

Where do you migrate this folder structure since there is no equivalent of “links to folders” in OneDrive?

Do you expect to migrate the entire folder structure in the OneDrive of Root (in the left)?
Or do you want to migrate it to the OneDrive of Emmanuel (in the right) because it’s in folder projects that belongs to Emmanuel?
If you say: “collaborative” belongs to root, it must be migrated to Root’s OneDrive, then apply the same logic to the folder “Owned by edreux” and migrate “Owned by edreux” to the onedrive of Emmanuel.

You have now understood the issue: Folder trees gets exploded.
After the migration, users see the files and folders they own in their personal onedrives. The other files are visible through the sharedWithMeView.

This example demonstrates that OneDrive is not the right place to migrate collaborative content.
For small companies (up to 500 users) that have standard usage of Google Drive, the standard migration to OneDrive might be sufficient and will not disturb or disorganize the company.
For larger companies, Cloudiway believes that the right place to migrate collaborative content is sharepoint Online in dedicated Site Collections and/or document libraries.

With the above sample, the entire content of the collaborative folder would be migrated to Sharepoint Online, for example in https://mytenant.sharepoint.com/sites/Collaborative
After the migration of the “shared” folders, the remaining data (folders and documents) can be migrated to the personal onedrives of each users.

The Cloudiway approach and solution is flexible enough to migrate your data in the location of your choices, while preserving permissions and without duplicating content.

After the migration, you have an infrastructure in place,a method and way of working adaptated to the Office 365 environment.
Cloudiway is the first and only solution on the market that has sufficient background in Google Drive migrations, able to propose such adapted solution to your need.

We would like to finish this article by introducing an additional complexity.
Let’s reuse the above sample and expose a couple of files through a Google Site.

Where would you like to migrate these documents:
– In the sharepoint site generated during the Google site migration?
– In the personal Onedrives?
– In dedicated collaborative sharepoint sites?
Everything is possible with the Cloudiway migration solution. This must however be carefully discussed and decided with Cloudiway during the definition of the migration path.